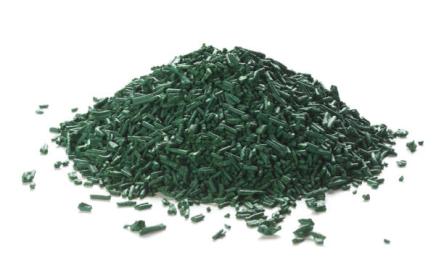 History and Posology of Spirulina

Spirulina is a microalgae of the family of cyanobacteria. Present since 3 billion years, it is one of the organizations at the origin of the life on Earth. It is its spiral shape that gave it its name. There are nearly 1500 species of blue microalgae, including 36 varieties of spirulina.

The species of spirulina most present on the market today is Spirulina Platensis. It is possible to find other food supplements based on blue algae, however, their production is less, if not, not controlled and their composition can reveal traces of heavy metals if the place of production is polluted. It is therefore advisable to take a food supplement where the mention "spirulina" is present because it is a guarantee of quality.

Originally, the first traces of spirulina were found among the Aztecs. They collected this blue algae on the shores of lakes and dried it in the sun. Packaged in the form of patties, spirulina was used as a food ration for workers and soldiers. It is the first food dopant discovered by man. Among the first places of production of spirulina we find notably Chad where it was used mainly for women in period of menstruation and during their pregnancy.

Today, spirulina was first mass-produced in the United States in a controlled manner. It is now produced worldwide and recognized as a superfood that is used mainly as a dietary supplement, especially by athletes. Spirulina is also used in developing countries to fight against malnutrition and severe nutritional deficiencies.

Concerning its composition, Spirulina is incredibly rich in high quality proteins: from 60 to 70% depending on the production for a very low calorie content. Moreover, it is an important source of carotenoids (antibody stimulators), mainly beta-carotene. We also find the presence of iron in large quantities, from 3 to 8mg for 5g of spirulina.

Finally, spirulina is also very rich in phycocyanin, the only natural blue pigment that serves as a food coloring. After numerous clinical trials, biologists believe that spirulina has numerous antioxidant, immunostimulant and anti-diabetic properties. Moreover, it allows the reduction of blood lipid levels.

When taking spirulina, it is advisable to increase the doses in a regular and controlled manner, starting with one gram per day for one week. Thereafter, it is possible to gradually increase the amount consumed up to 5g/day.

Spirulina, due to its high concentration of iron is recommended for women during menstruation and pregnancy, to compensate for the lack of iron. Finally, for the elderly, spirulina is a very good dietary supplement to counter nutritional deficiencies and increase muscle tone.

Spirulina is therefore an excellent food supplement that can be used at any age. For children, it is recommended to compensate for dietary deficiencies and it contributes to the good growth of young people.

This site uses cookies to offer you an optimized and personalized user experience, to make our audience statistics, or to offer you advertising and offers tailored to your desires and interests. You can, however, uncheck the cookies that you do not want us to use.

Technical cookies are necessary for the functioning of the site and can not be disabled. However, they are only collected and used during your presence on this site.